Back Story Tours explores for Gold

Back Story Tours explores for Gold in Colorado’s High Country.  There’s a short window when the first aspen leaves begin turning pale yellow and acres of aspen trees begin exploding into bright gold, burnished copper and orange. Back Story Tours captures the fall colors in trips guaranteed to showcase the drama of fall color in a majestic setting.

Back Story Tours begins at the Top of The Rockies in 10, 200 foot Leadville, Colorado home of the fabled Mineral Belt Trail, Colorado’s highest and most spectacular paved cycling trail.  We cycle the Mineral Belt Trail clockwise, traveling the steepest part first with astounding views of snow-capped Mt. Elbert and Mt. Massive, two of the highest 14ers in Colorado.  As we cycle, we stop to view historic California and Slaughterhouse Gulches, the Yak Tunnel, the site of Oro City, named for the abundance of gold found here, then it’s on to Blind Tom and Iron Mines and the Pyrenees Mine circling Leadville while stopping to learn the history of the area.

From Leadville, Back Story Tours travels South to Twin Lakes, two naturally-glacial lakes at the base of Colorado’s Highest peak, Mt. Elbert. We rent kayaks and canoes for the short paddle to the restored and historic 1880’s resort Interlaken-----once one of the most attractive tourist resorts in Colorado. The hotel complex was started in 1879 and enlarged after James V. Dexter bought the lakeside resort and grounds in 1883. The resort became a popular summer retreat for those that rode the train to a stop nearby and then took a short ride by stage or carriage to the south side of Twin Lakes. The resort was a popular stop for those on the way over Independence pass or nearby mining communities Today’s Interlaken is restored and great fun to wander through the historic hotels and cabins near the shores of Twin Lakes.

Leaving Twin Lakes, Back Story Tours ascends 12,000 foot Independence Pass the site of 2011’s USA Pro Cycling Challenge and descends past the ghost town of Independence at 10,900.  In 1879 Independence boasted 40 businesses and 1500 residents, but today is a hikeable ghost town.

Into Aspen we roll for an evening of wine tasting at the Snowmass Wine Festival and Aspen’s legendary watering holes and bistros.  The next day, we drive 12 miles up the Castle Creek Valley to the silver mining ghost town of Ashcroft, The 1930s saw a new flurry of interest in this ghost town. This time it was the Olympics and winter sports that drew attention to Ashcroft. Soon afterwards Stuart Mace brought his family and dog sled operation to the ghost town. In 1955 Mace and his Toklat huskies were featured in the TV series, Sgt Preston of the Yukon, and Ashcroft was used as a set for the filming of the series. Mace later devoted the remainder of his life to protecting the area from development and restoring the ecology, He was joined in that effort in 1975 by the Aspen Historical Society who helped put Ashcroft on the National Register of Historic Places.  While wandering through this restored ghost town, Back Story Tours also offers the delights of lunch at the nearby Pine Creek Cookhouse set amidst the staggering views of Pearl Pass and Castle Peak, further up the Castle Creek Valley.

Out of Aspen, over Mc Clure Pass to the junction of the dirt road which crosses Kebler and Ohio Passes, Back Story Tours journeys through the single largest stand of aspen in the state. Our dirt road wanders through mile after mile of gold as we ascend to Lake Irwin and the junction with the Ohio Pass Road.  The road descends into the historic coal mining town and ski area of Crested Butte, listed on the National Register of Historic Towns.  We love to take guests to the Burning of the Grump, a festival which culminates in the burning of a huge metal structure stuffed with everyone’s written complaints from the past year. At a blazing bonfire accompanied by song and dance, the Grump is destroyed in a pyrotechnic blaze.

Still further south on our Back Story Tours adventure, we drive to Durango to ride the Durango to Silverton Narrow Gauge Railroad from Durango’s 6700 foot elevation to Silverton at 9300 feet.  A three and one half hour rolling trip through the high country blaze of glory along cliffs that plummet to the Animas River far below, the Durango to Silverton Narrow Gauge is the premier train excursion for fall color.   We roll into Silverton in time for lunch at Natalia’s 1912, a former early 20th century bordello where today the ladies of the evening are long gone but the wild west dirt streets and mining town rowdiness survives.  After lunch, Back Story Tours takes guests for a short hike to the Christ of the Mines Shrine high above the town of Silverton.

Journeying on in our quest for gold beneath the shadows of the Mesa Verde Plateau, past Dolores and the Anasazi Heritage Center, we begin the ascent through some of Colorado’s finest and most inaccessible wilderness, finally climbing to the Lizard Head Pass summit and trailhead, where we always stop for a breathtaking photo op of Lizard Head, the most dangerous and difficult climb in Colorado because of its rotten, crumbling rock.

Telluride is our destination for the day along with a free, cool, wind-powered Telluride Gondola Ride from the town of Telluride, named for its tellurium mining days, up to Telluride Mountain Village, famed for its steeps and deeps skiing.  Our views encompass gold on the lower slopes of Palmyra Peak and the snow capped summits of the 14,000 foot Wilson Range.  Another optional exploration in Telluride is the four mile hike to 365 foot Bridal Veil Falls, the tallest free-falling cascades in Colorado.

Come hike, bike, kayak and ride the byways and back roads of Colorado. Discover gold with Back Story Tours.  We take you on the back roads to learn the story behind the story. 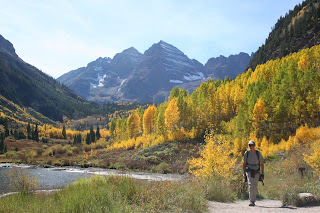